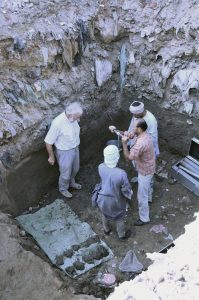 In March 2015, the local council of Matariya announced imminent large-scale construction work that would affect area 231 – situated in the southeastern precinct of the temenos – and therefore allowed the archaeological examination of this area before work commenced. The excavation of the area had to be conducted in only a few days and was constantly accompanied by the lively participation of many hundred residents/passers-by of Matariya.

It was the first time in more than 80 years that the massive mud-brick enclosure wall of the temple’s inner precinct, the so-called “High Sand”, was excavated. The wall measures about 400 m in diameter and encircles the obelisk of Senusert I. Already on the ground plans of the temple from the early 20th century, this particular structure dominates the site and has aroused/been of interest ever since. 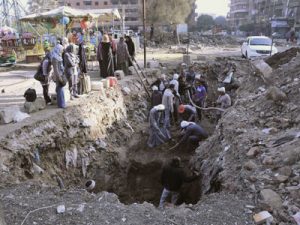 The analysis of pottery finds from the wall points to a date of construction in the middle of the 2nd millennium BC. Since the necropolis of the Old Kingdom is also situated in the eastern forefield of the temenos, it is likely that parts of it were levelled during the construction of the wall. The findings from area 231 back this thesis.