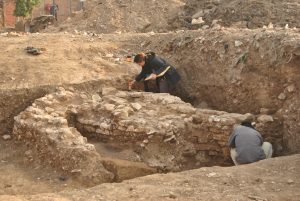 In the spring of 2014, the Heliopolis project had the aim to investigate a huge ring wall structure around the obelisk of Senusret I. The hypotheses regarding the meaning of this structure range from it being a fortress of the Hyksos period to an artificially raised temple platform with a ring-shaped frame of mud-bricks.

In a 15 x 110 m long section northeast of the obelisk, two mud-brick walls 8.5 and 10 m wide were found. Fortunately, the upper layers of the wall structure were above the groundwater level. They dated to two phases of the temple enclosure of the Ramesside Period. The dimensions of the bricks in the Ramesside walls, with a length of approx. 52 cm, are the largest ever used in Egypt. 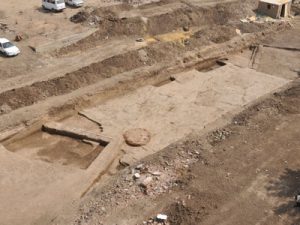 Probably located underneath the Ramesside walls, and in two other areas (west: 221; east: 231), this huge ring wall of more than 20 m width was, in all likelihood, built to protect the natural sand hill (gezira) on which the temple was built against floods. Geziras are river deposits from around 12,000 BC  and dominated the Egyptian delta in prehistoric times. Such a deposit is evident in the area of the Temple of Heliopolis. Currently, the project assumes that the ancient Egyptian idea of creation on the primeval mound of Heliopolis had a real-world counterpart. The sand of the gezira  was therefore thought to be the holy ground upon which the sun god began his work of creation.

However, a number of wall sections also show ceramics of the Late Period (6th – 4th century BC), probably dating to the dismantlement of the enclosure wall. Based on the current state of work, it must be assumed that several construction phases overlap one another.