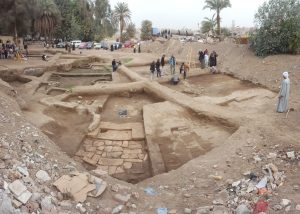 As part of his dissertation project, Max BEIERSDORF (University of Technology in Cottbus-Senftenberg) started the archaeological examination of the two main enclosure walls of the temenos area in the spring of 2014. BEIERSDORF put the main focus on the building history of the two mud-brick walls, concentrating on statics and techniques of construction. Furthermore, the excavation and documentation work on the walls provided first reference points for the temple’s in situ architecture.

The outer mud-brick wall displays undulating masonry, which was especially popular in the sacred architecture of Egypt’s Late Period (664 – 336/5 BC). [1] The single compartments of masonry were composed of alternating concave and convex curvatures. This particular type of masonry was repeatedly interpreted in the context of a mythological allusion, with its curved shape symbolizing the primeval ocean nwn, out of which the Egyptian cosmos – metaphorically represented by the temenos precinct – arose. The PhD-project is reviewing the evidence for this hypothesis. 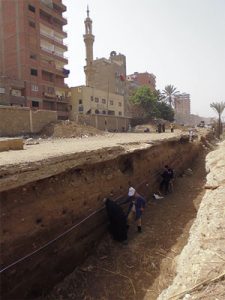 On the one hand the masonry visualized the divine residence inside the temple, on the other, it served as the sacred ground’s protection against floodwaters from the nearby ity-canal. The inner mud-brick wall was probably erected during the New Kingdom (1550 – 1070/69 BC). In contrast to the outer enclosure wall, its masonry does not undulate. The state of preservation of the inner wall shows massive destruction which was probably caused by floodwaters. It is most likely that the archaeological result of several, interlocked building phases has to be seen in the same context. 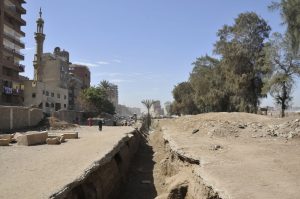 BEIERSDORF’s work on the enclosure walls was supported by the geophysical survey carried out by Thomasz HERBICH (Academy of Sciences of Warsaw) as well as by the geomorphological drilling executed by Prof. Dr. Morgan DE DAPPER (University of Ghent). The results of the drilling point to the existence of a limestone wall about 1 m below the water table.